Thanksgiving. It’s always been one of my favorite holidays, and today, while watching Planes, Trains and Automobiles on a crowded plane, I reflected on why that is.

What is it about the idea of coming home? The beloved American songwriter Stephen Foster wrote “no matter how far we travel or what sadness the world imposes on us, all our hearts ache for the best memories of childhood, the security of a family and parents, and the familiarity of a home.” That certainly explains a lot of it, but looking back on my early life, the memories are far from perfect. Why are we so quick to forget the bad and remember the good during these moments of nostalgia?

My answer to this question came in the unlikely form of John Candy, who throughout the movie I mentioned bumbles and stumbles through his life like a wounded trooper, his heart entrenched firmly in the past while he humbly tries to negotiate the present. The current narrative of his life reads like a very messy novel with no clear path to a peaceful resolution.

But we find out there is one thing he has truly excelled at in his life. He has loved well. At one point in his journey he has truly shared his chaos with another person, and the memory of his time with his wife is enough to keep him going. It is a poignant lesson from an unlikely hero.

But that isn’t the end of the story. Through his interactions with his counterpart Steve Martin we see that perhaps, despite his chaotic life, he still has something to teach. Martin’s character is a busy man, and although he loves his wife and kids deeply, his life is in some ways passing him by. Through his constant struggle for the legal tender he has forgotten an important lesson, and somehow this all crystalizes for him in the form of an obese guardian angel that came crashing into his life, seemingly out of nowhere.

What we are left with is the idea that people all long for some kind of human connection. Even those of us who appear the “toughest” or most distant. Plato said, “Be kinder than necessary, for everyone you meet is fighting some sort of battle” and I think this is very true. Simple moments of human connection make these battles so much more bearable.

Which brings us back to the idea of giving thanks. Thanksgiving brings us all together for a brief moment to celebrate perhaps the most important antidote to skepticism and resentment, and that is gratitude. Thinking about the things we have versus the things we don’t is an important battle in this life, and often, for one day at least, we spend a little time with the people who know us the best and figure out what it is we have. Sometimes this isn’t so apparent, and families can often be incredibly chaotic and dysfunctional.

But if you’re like me, you too may one day find yourself a long way from home and actually missing this chaos. So dust off the china and tap the boxes of wine. 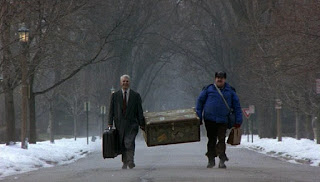