When we are no longer able to change a situation, we are challenged to change ourselves.
~Victor Frankl

But I tried didn’t I? At least I did that.
~Randall P. McMurphy- One Flew over the Cuckoo’s Nest

The Pacific Northwestern salmon beats itself bloody on its quest to travel hundreds of miles upstream against the current, with a single purpose, sex of course, but also... life
~Drew Baylor ~Elizabethtown

When I was a young man in my early teens, I became interested in a movie called “Bang the Drum Slowly.” It was a baseball movie, where Robert DeNiro plays a young catcher dying of a terminal illness, who has one last season in the majors before his illness takes him. Something about the movie and this phrase captured my imagination, and sometimes during particular moments that I thought life was moving too fast, I would repeat this phrase to myself. Bang the Drum Slowly. Slow down a little life, and let me enjoy the moment. I’ll get older soon enough.

And sure enough I did. I had all kinds of dreams as a kid that didn’t exactly materialize, but some other ones came to fruition instead. So here I sit, a psychologist, not quite old, but not exactly a young man either, trying my best to help other people realize their own dreams, or at least make the kind of changes in their lives to find some kind of happiness.

I was reminded of all of this, because this week one of my patients passed away when her heart simply didn’t work anymore. It was my first death since I’ve been a psychologist, and it hit me pretty hard. This is a letter I got from her a couple of months before she died. 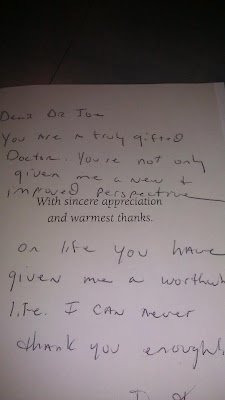 I share this on these pages, because in many ways I was incredibly proud of this woman, and her willingness to make changes in her life, even as it was coming to an end. She could have simply thrown in the towel and kept on doing what she was doing, but instead she chose to try and change a few things in her life and take responsibility for her own happiness. It’s something so few of us are truly willing to do, although if you ask people they will usually tell you otherwise. What we really often want is someone else to change. In reality however, the only way we change the temperature of our own happiness in any kind of lasting way, is to make some internal changes in ourselves. The people and places can and do change, but in the confines of our inner worlds, the song remains the same. Confronting and changing these inner workings is difficult work, and in this case, a very brave woman was able to do this. Right at the end of her life, sure, but still, much like McMurphy in Cuckoos’s Nest, she tried goddamnit. At least she did that.

The saddest part of the story was that she had so little time left after she decided to make these changes in her life, and I couldn’t help but wonder why the drum couldn’t have beat a little more slowly for her. So much of life seems to work like this. We thrash and we struggle and we flail, and in the end we find we held the keys to our own prisons the whole time. This woman found this out at the end of her life, and, although I wished for her to have more time to enjoy herself,  maybe I missed the whole point.  Maybe the happiness she found at the end of her life was the culmination of a lot of suffering that eventually crystallized into wisdom. Although it would be nice to think we can have one without the other, I’m not completely sure that’s how it works. In any case, she found her peace at the end, and, in dying, left me with my own new lessons to contemplate. Am I taking responsibility for my own happiness, or have I grown complacent and cynical? Am I actually walking the walk, or am I just saying the words? These are questions we should ask ourselves again and again, and personally I’m starting today. Thank you for this one last lesson my friend.
on July 02, 2012 No comments: