Listening to the drums

“Parents rarely let go of their children, so children let go of them. They move on. They move away. The moments that used to define them - a mother's approval, a father's nod - are covered by moments of their own accomplishments. It is not until much later, as the skin sags and the heart weakens, that children understand; their stories, and all their accomplishments, sit atop the stories of their mothers and fathers, stones upon stones, beneath the waters of their lives.”

I had always heard your entire life flashes in front of your eyes the second before you die. First of all, that one second isn't a second at all, it stretches on forever, like an ocean of time... For me, it was lying on my back at Boy Scout camp, watching falling stars... And yellow leaves, from the maple trees, that lined our street... Or my grandmother's hands, and the way her skin seemed like paper... And the first time I saw my cousin Tony's brand new Firebird... And Janie... And Janie... And... Carolyn. I guess I could be pretty pissed off about what happened to me... but it's hard to stay mad, when there's so much beauty in the world. Sometimes I feel like I'm seeing it all at once, and it's too much, my heart fills up like a balloon that's about to burst... And then I remember to relax, and stop trying to hold on to it, and then it flows through me like rain and I can't feel anything but gratitude for every single moment of my stupid little life... You have no idea what I'm talking about, I'm sure. But don't worry... you will someday.
Lester Burnham- American Beauty

November is a big month for gratitude, especially in the Facebook era. There seems to be a lot of it going around, and frankly, when it’s sincere, I personally believe gratitude is one of the most proactive tools we have. Maybe life can be best understood as one large continuum, with appreciation for all of the little moments and people in our lives on one end of the spectrum, and resentment and cynicism on the other. We can always find things that don’t seem quite fair in our lives, and when we focus our attention there, that’s resentment. On the other hand there are plenty of things in our lives that, if we look closely at, make us incredibly lucky. When we focus our attention there, that’s gratitude.

As a counselor, I temper my own understanding of gratitude with the issue of loss. I’ve sat with people who would do anything for one more day with the people they’ve lost, and yet their time has passed. And when we are confronted with these moments, and rest assured we all will be one day, we start to ask some nagging questions. Why did we waste so much time? Why didn’t we say all of the things we had to say when these people were still living?

One day these questions may keep you up at night..Trust me on this.

What I have learned from this, is that real gratitude is not simply writing things down that we are thankful for, although that’s fine as far as it goes. Take a long look around at the holiday table this year. One of those people may be gone next year. I know it seems morbid to think about, but I think it can also lead to a greater sense of urgency about what it is we are doing here.

I had a chance to practice what I preach a little this Thanksgiving, when my own mother came out to stay in Chicago for the week. As I was preparing for her visit, I got a text from a close friend who had lost her own mother over the previous year. She wrote, “Enjoy every minute with your mom, I'd do anything for another moment with mine.”

Although I am certainly happy to see her, I have a tendency to get a little impatient, and reading my friend’s text slowed me down a little. So this week I took some time to appreciate the little moments. Although I’m not exactly sure how it happens, most years my holiday persona more closely resembles the Grinch than it does Jimmy Stewart, and this year I decided to change that up a little. So we played games, and drank (lots of) wine, and bought gifts, and made 2012 one of the best Thanksgivings I can remember. This shouldn’t be a chore, but I’d gotten a little complacent over the years, and I needed a little reminder that all of this time with my mother is coming to an end. It helped me understand the seriousness of fleeting time, which ended up making this time a lot more fun. 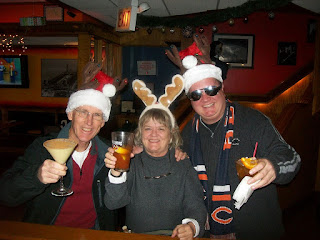 And perhaps most importantly, I remembered to have some respect for the fleeting nature of my own time. Maybe I will be the one who won’t be sitting at the holiday table next year. It’s something I’m going to think about. The Buddhists talk about how we should meditate on the reality of our own deaths each and every day. Again, sounds morbid on the surface, but I think hold a great deal of wisdom regarding taking the time we have remaining a little more seriously. That doesn’t mean LIVING seriously, and in fact to me, it means the exact opposite. For you it may mean something else, but I do think there is value in contemplating the question.

I was reminded of all of this recently while watching the Blue Man Group, whose entire show seems to be about the concept of living your life with a greater sense of urgency. In one particular sequence the Blue men started pounding the drums as they were holding up various signs. The drums got louder and louder until they finally reached a kind of fever pitch that ended with the signs , YOUR LIFE, (loud drums), IS PASSING (even LOUDER drums) YOU BY!!!

And it is! These drums have been pounding in my head ever since I saw the show, and I hope they will continue to play. They remind me to live a little more mindfully, and to spend less time on cynicism and more on gratitude. They remind to not be lazy with my time, cheap with my affection, and complacent with the people in my life.

The drums have been a welcome addition to the soundtrack.. 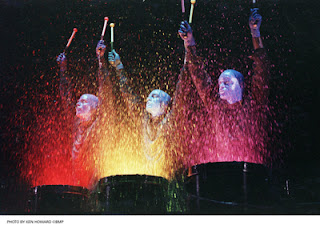