And those who were seen dancing

And those who were seen dancing were thought to be insane by those who could not hear the music.

Some days as a therapist, the world stops to listen carefully. Your advice is welcomed as well thought out and life affirming, and patient after patient informs you how much they appreciate your time, wisdom, and advice.

Today was not one of those days.

I’ll live. On the whole there are more good days than bad.

But it was something that happened after work that provided perhaps my best educational moment today.

It was a woman dancing. Just dancing. There was a little man playing a ukulele on the street, and she had stopped to dance. Wildly dance. Inappropriately dance. It was the middle of the afternoon and everyone else was simply going about their business. Not her though. She had something inside of her she wanted to express, and nothing was going to stop her. Some gave her dirty looks. Others rolled their eyes.

It was then I thought of Friedrich Nietzsche and the quote at the beginning this essay.

“And those who were seen dancing were thought to be insane by those who could not hear the music.”

It perfectly summed up the moment. Everyone (including me) seemed busy and irritated except her. How dare someone dance in the middle of the day?

I stopped to join her.

As the little man took a break from his Ukelele, the woman decided to take a break as well. It was just as well, I may have been cramping her style a little.

But I did get a chance to talk to her. She was a Maori woman born and raised in Auckland who had seen a lot. Abuse, poverty, alcoholism, and all kinds of suffering and loss. But still she danced. She danced because there was nothing left to do BUT dance. What else could life throw at her? (her words). Yet still she could hear the music while a lot of the rest of us apparently couldn’t.

Of the 100 or so people I saw in that little square that day, she was the only one who stopped and danced. Joyfully. Mindfully. In the moment.

While the rest of us hurried about…

It was a good lesson for me actually. Good, bad, sorrow, suffering, comedy, and tragedy. If we’ve lived at all in this life we’ve probably seen a little bit of all of them.

If we’re still drawing breath however, we still have a choice if we’re going to stop and listen to the music.

So tonight I’ll go home, dust myself off, have a glass of wine, and prepare to do it all over again. A little wiser from having watched a woman dance in the middle of the afternoon. At 7 A.M I’ll get up, hit snooze a couple of times, and get up. There’s a lot more life to live.


Tomorrow I'm gonna remember to listen to the music. 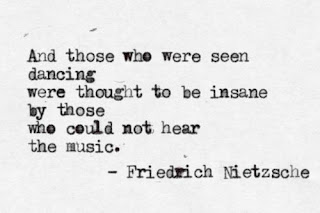