Today is the greatest day I've ever known. 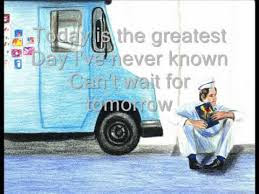 Warning, this essay might not be about what you think it’s going to be about.

But let’s get started.

It was the 90’s in Chicago and I had moved there to take the world by storm as a comedian.

It wasn’t really working out.

I was working as a doorman at a bar and not even doing that very well. I didn’t like taking people’s fake Id’s. Those things were hard to come by.

One cold spring night I was walking home from work in a funk. I walked passed restaurants and bars and people having fun with their friends and wondered if I made the right move coming to Chicago. Everyone seemed to have it all figured out but me.


It was a dark night of the soul.


I walked past a place and head a song that caught my attention. It was a sad sounding song but the lyrics seemed kind of light and happy.

I felt strangely uplifted by the strange contrast between the song's music and lyrics and went inside.

It was The Smashing Pumpkins, and they were fronted by a guy named Billy Corgan.

I didn’t realize the significance of that night until much later on. For one, I was seeing a band that was going to become one of the voices of a generation in a small little venue.

But to me, it was much more than that. That song was stuck in my head and became my new favorite tune that summer. It got me through some tough days and long nights.

Eventually, I learned I wasn’t crazy. The song was about someone going through crippling depression. Corgan wrote it about his loneliness, isolation, weight gain, depression, and the suicidal feelings he was experiencing in the wake of a life that wasn’t working out the way he expected. In his own words~

“I reached a point in my life where I felt like I was living through some old character. It's like you assume some character and you take that as far as it can go and then it doesn't work anymore, so you shed your skin-and that's kind of what happened to me. I had become something that I probably am not in order to succeed and at some point I realized that, whatever I was, was hurting me, so I needed to go through the process of getting rid of that person. I had to kill off one part of me so that I could go on, and some of that started in the writing of the songs."

“It's sort of a wry observation on suicide, but in essence, the meditation behind the lyric is that every day is the best day, if you let it be."

As for me, I grew a lot that summer in Chicago. I made new friends, got a better job, and did a few shows around the city. I used to walk by this purple house that was about a block from my own. It was owned by?

None other than Billy Corgan! He may have written those very lyrics there that got me through that first tough year in Chicago. He was rich and famous and I was broke and aspiring, but it seemed like he was going through a lot of the same things I was.

The lesson was something that stuck with me. I had been operating under the assumption that when I just “made it”, that I would no longer have dark days and depressing nights, but perhaps I was wrong. Maybe I was chasing all the wrong things?

Years later, I made a little name for myself discussing why people who have achieved fame and fortune are so prone to depression and self-destructive behavior. It was a bit of a strange twist, all things considered. I used to feel so down because I didn’t have all those things, but I’ve learned along the way that all of those superficial and external rewards like fame and fortune don’t do much to mend a fractured psyche or a broken heart.

But I also think a lot about what Billy later said about the song, “every day can be the best day if you let it be.”

It speaks to how we do have some say when it comes to our moods and our attitudes, despite the difficult circumstances we might find ourselves in. I’ve learned the hard way that depression plays no favorites and recognizes no measures of social status.

But I’ve also learned that it is within our power to be proactive about our response to depression. One of the most compressive books about depression is called, “I never knew I had a choice” by Gerald Corey. The book is a behemoth, and well worth reading for a master class on depression.

But in many ways, the whole point is right there in the title.

Personally, when I’m having one of those days now I think about it like going into battle. I play my favorite music and watch funny movies that make me laugh and am a little more generous with myself than I normally would be.


I know these days pass though. They have passed every single time I’ve had them and I know they will continue to do so.

But I’ve also learned to have some gratitude for the good days, because they pass as well. Great days with friends and wonderful days on vacation and long Sundays that last forever also slip quickly away. That’s the tradeoff. As C.S. Lewis said, “The pain I feel now is the happiness I had before. That's the deal.”

But in the meantime, we have today. And maybe it will be the greatest day you’ve ever known. But probably not. It probably won’t be the worst either. The odds don’t favor it.

In either case, we can greatly increase our odds of improvement by taking notice of the little moments. By being kind to others. By slowing down. Tasting our food a little better. Appreciating our friends a little more. It is my experience as a psychologist that people suffering from depression and anxiety have both lost sight of the little moments, often for very different reasons.

I’ve gotten better at noticing the little moments living in New Zealand. There are beautiful things everywhere. As Kurt Vonnegut says so well, “And I urge you to please notice when you are happy, and exclaim or murmur or think at some point, 'If this isn't nice, I don't know what is.”

I’ve got that written down in a lot of strategic places.

But today I’m feeling a little down about going back to work tomorrow after four days off, and I’m listening to the Smashing Pumpkins. I’m thinking about that kid walking the lonely streets on a cold Chicago night searching for something I’m not sure I ever really found.

But I have found something I do have control of all these years later.