Okay, if you have ever read a thing I’ve written, you probably get it by now. I love quotes. I’ve been collecting them since I was about 12, but these two are relatively new to my collection.


I had to think about the quote from Tsunetomo (a samurai from hundreds of years ago) for quite a while. What exactly is he saying here? Forget about the big stuff and focus on the small things instead? I thought we weren’t supposed to sweat the small stuff?


WHICH DAMN QUOTE AM I SUPPOSED TO BELIEVE??


But I kept coming back to the quote, and now I think I get it. We all worry about the “big” stuff sometimes. Am I going to die someday? Am I always going to worry about money? Is my health going to decline? Are people I love going to die?


All that stuff is inevitable. I accept it. I get it. I’m not even that upset about it anymore.

Because matters of great concern should be treated lightly. All that is going to happen. Maybe tomorrow. Maybe in 50 years.

But they most assuredly are going to happen.

Some might think this is a little morbid, but I think it’s the second part of the quote that gives us the solution.


“Matters of small concern should be treated seriously.”


I think I get it now. It’s the little moments. The little bit of laughter with friends. That moment while you’re traveling between periods of boredom where you see something that blows your mind. A baby’s first smile. A moment at work where you feel like you made a difference for someone.


The small moments. Those things we take for granted. Those tiny little pieces of our days where we experience something that makes us feel a bit more alive.


And if we're honest, we also blow right through a lot of little moments. We forget to give people our undivided attention. Turn on the TV instead of talking to our families. Stare at our phones while we’re out to dinner with our partners.


And if you miss enough of these little moments, you really can lose it all. One quote about parenting I really like goes, “Listen earnestly to anything your children want to tell you, no matter what. If you don't listen eagerly to the little stuff when they are little, they won't tell you the big stuff when they are big, because to them all of it has always been big stuff.”


That’s pretty powerful when you reflect on it. Kids get the importance of the little stuff right from the beginning.


I also love the quote about embracing uncertainty, and how some of the most beautiful chapters of our lives won’t have a title until much later. Good lord is this true. Looking back on our lives, those periods of fear, change, and adjustment, all eventually become the notes and music of a much larger song.


All the same, it’s hard to remember these lessons while things are happening, Life comes at us pretty fast, and sometimes we forget that our experiences won’t have full clarity until much later. A broken heart feels like we’ll never find love again, but we need to go through a few of these to appreciate the depth of what love really is. We lose a job or change a major or leave our homes, and feel that maybe things aren’t going to work out, but later see these events were all just little pieces of a much larger jigsaw puzzle.


A while back I had a chance to pass this idea on. Some of the great summers of my own life were spent working in the National Parks in the US. I worked at Yellowstone, the Grand Canyon, and a few others in between. I returned to Yellowstone and saw all those fresh-faced kids running around, flirting, teasing, and (hardly) working and told a kid to squeeze every moment out of this experience, as it may end up being one of the greatest summers of his life.

And the funny thing is, I remember someone saying the same thing to ME when I worked there all those years ago. I nodded, smiled, and thought, “sure thing old man, the decaf coffee is over by the Prime Rib.”

I got the distinct feeling that this kid was thinking something similar.


And I get it. I really do. Sometimes we just don’t appreciate the most significant moments of our lives while they’re happening.


But as someone in the “middle-age” chapter of my life, I realize it’s more important than ever to reflect on the little moments. Great memories have often been the fuel that has kept me going through the hard times, and I know they are a kind of currency my future self will most certainly be able to spend.

I want to generate a whole lot more of them.


And right now I’m not really sure what this chapter will be called one day. I’m sure the answer will come to me at some point, but right now I’m going to try and be bold and accept there are things I just don’t know yet.


But I do want to be a better “noticer.” A braver stranger. More present. More aware.


Because matters of small concern should be treated seriously. 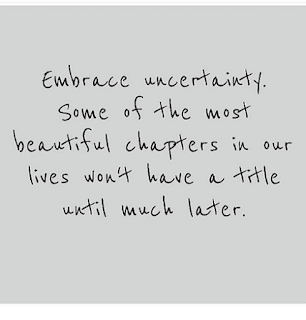