Bowling alone- How a declining lack of community and belonging affects us all. 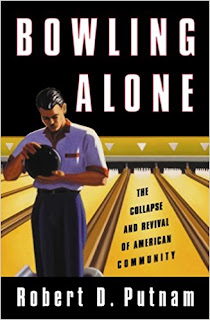 A couple of generations ago in , people used to bowl together. A lot.

Not only would they bowl together, but they were in leagues together. I can still remember seeing my grandfather and uncle polishing up their bowling balls, putting on that team jersey and heading out during the week. Bowling leagues were a thing back then.

In the years between 1980 and 1993, people stopped doing that. League membership dropped 40 percent in that short period, although bowling itself remained popular. 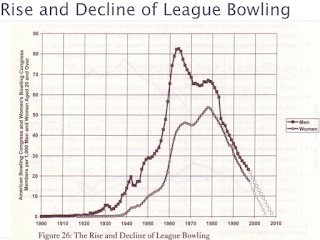 What’s this got to do with anything?

A man named Robert Putnam decided to explore this phenomenon and wrote about the decline of social belonging in . He also found that during that time period, people sat down to dinners as a family 43% less often, attended club meetings 58% less often, and had friends over to their home 35% less often.

He explored a number of reasons for this decline in what he called "social capital." Busier lives, changing workplaces, and longer commutes all played a role. Watching television decreased social capital a great deal. And that was back when there were like 12 channels.

According to Putnam, one of the side effects of the decline in social capital is less social involvement, including lower voter turnout, fewer people volunteering and attending church services and communities losing their sense of shared purpose and belonging.

Putnam published his book in the year 2000, now a whole generation ago and prior to the stratospheric rise in social media as a means of communication, Netflix as a ticket to almost unlimited entertainment, and Tinder as a means to a quick hook-up.

His finding that our tendency to lose ourselves in television seems even more intense these days. You used to have to wait to see what would happen on your favorite show until the next week. Now you can watch the whole season in a day.

And some might argue that social media might help us stay connected, but does it really? I suspect a true scan of an average person’s ‘friend” list on any of the major sites would reveal they don’t get together with most of the people on that list.

And sure you can grab a date on Tinder pretty quickly if you’re a semi-good looking person.

But I’ve had far too many people in my office with broken hearts and much worse things than that as a result of fleeting sexual relationships, to know that’s also not a great fix a lot of the time.

The result is we are in many ways still feeling disconnected. If you want to see how bizarre this really looks, go out to any restaurant and watch a group of friends getting together. My guess is half of them will be on their phones as opposed to being fully present with the people they are ACTUALLY there to spend time with.

I can’t help but feel our lack of connection also has a cost. All the kids I grew up with hung out together until the street lights came on at dark. We knew every family on the block (although some were sworn enemies). Getting us inside was actually a chore. For many parents now, getting kids OUTSIDE is the chore. And this isn’t simply an American phenomenon either. In the , three quarters of children spend less time outside than PEOPLE IN PRISON! https://www.theguardian.com/environment/2016/mar/25/three-quarters-of-uk-children-spend-less-time-outdoors-than-prison-inmates-survey

I don’t think a sense of community is something that you lose overnight. The fact that families don’t sit down together for dinner nearly as often seems to be one place that it starts. And in the secondary circle beyond family, we aren’t keeping those community relationships together either. One-third of Americans have now never met their next-door neighbors. https://www.citylab.com/equity/2015/08/why-wont-you-be-my-neighbor/401762/

Every time there’s a school shooting in , all the usual tired arguments get repeated over and over again. It’s so damn exhausting. I have my own beliefs about guns and mental health, but that’s not a place I want to go today.

I can’t help but think some of our problems are related to the lack of community and connection. A sense of belonging is a powerful need in humans, and when we don’t find that in the traditional sense, we sometimes look for this belonging in dangerous places such as gangs, online hate groups, and in the company of other angry people.

Societies don’t lose their way all at once, but one can’t help but wonder where it is we are evolving when we don’t prioritize our time to make families and communities a little stronger. This is the glue that keeps the village running smoothly.

“It takes a village” is becoming, “it takes a suburb of individual internet stations.”

I wish we would think a little more about what this might cost.

Fixing the broken windows in our lives

I have a little confession.

As a psychologist, I don’t always enjoy reading the work of other psychologists. The standard formula is often taking an idea, outlining it in the first chapter, and then just kind of repeating that idea for the next 400 pages or so. Plus there’s too much jargon. I know the jargon and don’t even use the jargon. Our clients rarely care too much about that stuff.

There have however been some wonderful books written about psychology by journalists that have shed some light on why we do what we do. The Tipping Point by Malcolm Gladwell was one of these books. In this book, he explored a theory of crime and urban decay called “fixing broken windows.’ A summary:

“If a window is broken and left unrepaired, people walking by will conclude that no one cares. Soon, more windows will be broken, and the sense of anarchy will spread from the building to the street, sending a signal that anything goes.”

In other words, when you let the little things go, the bigger things can soon pile up as a result. The creators of the theory demonstrated the idea in a number of cities and found it almost always held up.

Beyond economics and crime, I think there is perhaps also an application for those of us managing the problems in our day to day lives.

When we ignore the little things long enough, they often become big things.
There are many examples of these broken windows in our lives. Maybe we’re feeling disrespected or unappreciated at work and have begun calling in sick more often and slacking off. Perhaps it’s been a few weeks since we’ve been intimate with our partners when we once had a healthy and active sexual life together. Maybe we notice our once happy-go-lucky child is all of a sudden distant and avoidant.

It’s easy to ignore broken windows at first. Maybe we simply tell ourselves things will go back to normal soon enough. Or that it’s just a blip. Or perhaps not worth the trouble of talking about.

But as I’ve learned the hard way in my own life, broken windows become very messy houses if we leave them long enough. Unreturned phone calls become estranged relationships. An irritating work situation becomes full on insubordination. Failing to discuss relationship disagreements becomes going to bed a little later and almost a complete lack of affection. 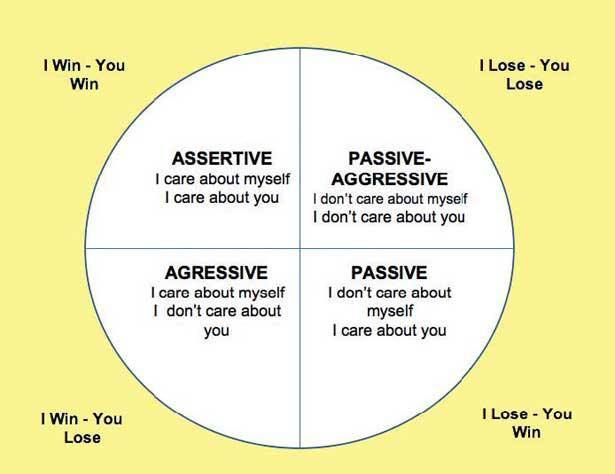 We can address these broken windows by learning to embrace assertive communication. As we see from the graphic above, all of the other three primary modes of communication end with someone losing. When we are passive, we sacrifice our own needs. When we are aggressive, we neglect someone else’s needs. And perhaps the most irritating of them all is passive-aggressive communication, where we are clearly bothered by something and punish both ourselves and others rather than actually talking about it.

Assertive behavior is not always easy. When our emotions get involved, it’s really easy to either heat up or shut down. Assertive behavior requires us to manage these emotional surges and ask, “what problem are we actually trying to solve here?” Even the best of us (I’m not one) get it wrong. Get it wrong a lot.

Broken windows also occur all the time with our physical health. Maybe we’re not sleeping nearly as well as we used to, but chalk it up to a bad run rather than exploring the root of the problem. Perhaps we’re experiencing pain somewhere in our bodies but ignore it rather than go to the doctor and potentially hear some bad news (men are notorious for this.)

Both physical and emotional pain usually starts with a broken window. A warning sign. A little red flag letting us know that something is not quite right.

This is, in fact, one of the primary purposes of pain. To open a window and let us know that something needs checking out.

In 2018, I have resolved to start fixing a number of my own broken windows. I emailed someone I was at odds with, made an appointment with a doctor, and took my car into the shop. In all three cases, I actually felt tremendous relief when I got up and fixed those windows.

Give some thought to the broken windows in your life. I bet you can find a few that need a little attention. 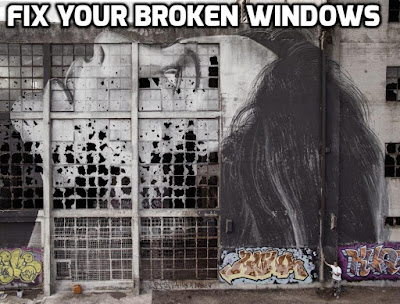