Went to Midnight Mass last night for the first time in about 20 years. I wasn’t drawn for any particular religious reason or obligation, but rather out of a sense of curiosity. Would it be the way I remembered it? Somehow I always went kicking and screaming to those kinds of things, but last night I actually went a half hour early to see the choir sing Christmas Carols. Maybe I’m getting a little sentimental in my old age. 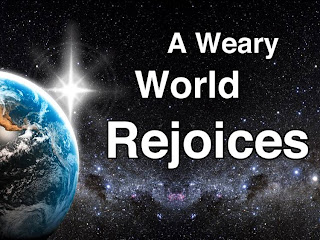 I was particularly struck by their version of “Oh Holy Night,” which has always been one of my favorite Christmas songs. I listened carefully to the words,

‘Long lay the world in sin and error pining.
Till He appeared and the Spirit felt its worth.
A thrill of hope the weary world rejoices,
For yonder breaks a new and glorious morn.’

I think perhaps what draws me so much to the song is it emphasizes a sense of renewal and hope. Although I’m not personally as invested in the spiritual aspect of the song, as a psychologist I spend nearly all of my working day trying to cultivate a sense of hope in the people I see, with varying degrees of success. This song conveys it so simply, and I am a little jealous.

What I saw however, as I scanned the eyes of people singing along with the choir, was that this hope, however fleeting it may be, is a real thing. Although other holidays such as Easter are more associated with renewal, I think Christmas contains a lot of this quality as well. For me personally, I also wanted to feel this sense of hope. Looking back on Christmases past, I know I certainly didn’t get everything I asked for, but somehow it was all still okay. A lot of people had taken time to think about me and buy me presents and give me a bit of their attention for a day, and that was enough. My own worries could wait for another day. Christmas was about fun. Kids spend hours and hours of their energy in pursuit of the things they want, and the look on a kid’s face when their presents finally arrive is really kind of a wonderful sight to behold. Sure you can argue about commercialism and the reason for the season and all of that, but still, it’s fun to watch the kids with their toys.

I think the phrase “the weary world rejoices” applies a lot more to the parents though. You can see it in their tired eyes that they’ve spent a lot of time shopping, worrying, wrapping presents, and generally doing everything in their power to make sure their kids have a Christmas to remember. The end of the season brings a kind of relief and a sense of being finally able to let go of the rope. Right or wrong, parents have gotten through another Christmas. The weary world rejoices. Now pass the eggnog..

So I found myself at Midnight Mass wanting to borrow some of this hope and relief. Somehow in trying to dispense these things to others, I found my own battery had been drained a little. Seeing people belting out the songs and smiling and enjoying each other, I felt a little like the Grinch, down from the mountain to sing with the people in whoville. By the end of the mass I found, rather unexpectedly, that I had joined in the fray and the chaos and the handshaking, and yes, even the singing. Life is not a spectator sport. It’s a platitude I always preach to my clients, but often forget to apply to my own life. Yet here I was, mingling, socializing, IN A CHURCH…  One thing I certainly learned last night, was that I still have the capacity to surprise myself. It’s a wonderful realization.