I always wanted a happy ending... Now I've learned, the hard way, that some poems don't rhyme, and some stories don't have a clear beginning, middle and end. Life is about not knowing, having to change, taking the moment and making the best of it without knowing what's going to happen next. Delicious ambiguity.
Gilda Radner

“And that's how things are. A day is like a whole life. You start out doing one thing, but end up doing something else, plan to run an errand, but never get there. . . . And at the end of your life, your whole existence has the same haphazard quality, too. Your whole life has the same shape as a single day.”
― Michael Crichton, Jurassic Park 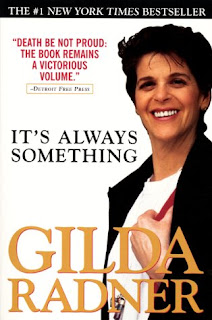 Found myself thinking today about one of my favorite comediennes, Gilda Radner.  She's the author of the first quote here. Delicious ambiguity. What a great turn of a phrase. How did she come up with it? Turns out it’s a story worth telling. She met the love of her life, Gene Wilder after a lifetime of struggle. It was love at first sight. They fell quickly in love and got married. A year later she was diagnosed with Ovarian cancer.

Life can be cruel sometimes.

She wrote an autobiography during this period of her life. The title has always been embedded in my brain.

In the end, I’m not sure there’s a better description of life. It’s always something. We spend so much time worrying and fretting and putting out fires, and in the end it’s all an exercise in futility. We never have complete peace in this life. Not really. As one flame is extinguished, another one begins to spark. So it goes.

So what are our choices? Do we accept that life is a never ending series of struggles and surprises, and stoically plug away? Perhaps. But maybe there is another alternative.

Maybe, just maybe, it isn't the end of the world. Perhaps it’s a question of perspective. What if, on a long enough timeline, all of our little worries and problems and conniptions are simply elements of a longer narrative that have yet to completely clarify themselves? I know from monitoring my own absurdity, that time does in fact heal things in the strangest of ways. It doesn’t take years either. Sometimes it can take hours or minutes, and, when we’re really attuned to our own emotional reactions, even seconds.

How do we ever get to this place? Each one of us has stood, humbly in regret, and considered how our emotions have been hijacked in the wrong direction. Perhaps we said something awful that we couldn’t take back, or acted impulsively when we were hurt, or made a decision based on emotions rather than reason. We all do these things. All the time actually. We (I!) throw these minor temper tantrums in our heads all the time. Why do all the traffic lights turn red right when we get to the intersection? Why do the unexpected bills come right when we get a little ahead?

So perhaps the takeaway from Mrs. Radner’s philosophy lies in her advice about “Delicious Ambiguity.” We never really know what direction our day is going to take. There are surprises everywhere, and some of them are good, many of them seem bad, and all of them come regardless of what we think we “deserve” out of life. Attitude is where we have our power, and, although we can’t often predict all of the plot twists, it does in fact allow us to chose if the little movie that is our life is going to be a tragedy or a comedy. The line is thinner than we often think.

And now, I have to wrap this little essay up, and take care of a couple of things. My new white shirt has red wine on it, I’m out of clean underwear, and I’m pretty sure I left the lights on in my car last night. Any of these things would be enough to drive me crazy on most days, but for now I’m going to laugh, dig my way out of the mess I made for myself, and soldier on.

Welcoming in 2013 this week, and thinking about New Year’s resolutions. Like most people, I think about things I’d like to change. I’d love to lose some weight, stick to an exercise plan, and in general manage my life a little better. Who wouldn’t, right? These are things most of us struggle with. But they’re not on my list this year. It’s been done to death.

No this year I want to work on something a little more internal. It occurred to me that I am not good at accepting constructive criticism. Or criticism. Or even feedback really. It’s a bad character trait and one that I know holds me back.

I believe because like most people, my first reaction to any kind of criticism is to defend. Sometimes even defend AND attack. We often take critiques as a blow to who we are as opposed to something we’ve done, and this activates our defenses. The shame in this is we don’t take the time to really listen to what is being communicated and use this information to improve ourselves when this happens.

When looked at from a long enough perspective, all of life involves feedback. When we smile at a pretty girl in a bar and they don’t smile back, that’s feedback. When we tell what we think is a hilarious joke and people nervously chuckle and drop eye contact, that’s also feedback. (Those two are fresh in my mind after New Year’s Eve).. Every laugh, smile, nod, and even raised eyebrow communicates something to people, and we are all constantly in a state of reinforcement and communication with each other. It’s kind of fascinating actually.

A caveat to accepting feedback is that there ARE people out there who seem to exist for the sole purpose of snuffing out the dreams of others. These people don’t create anything themselves, but are quick to constantly belittle the work of others. If you have someone like this in your life, do your best to separate yourself from them. Their attitude says a lot more about them than the things they say about you.

But ultimately, when we do create something, we have to understand that not everyone is going to “get” something in the way we intended. Maybe we didn’t communicate it very well, or glossed over something, or were too obscure in the way we made our artistic choices. When this happens we have an opportunity to listen closely and try and understand where we lost people. This is how we get better.

It rarely seems to happen that way however. We get hurt that people don’t appreciate our efforts, and we use a whole series of defense mechanisms to deal with this hurt. We may attack the messenger because we dislike the message. Or we may rationalize that other people’s opinions don’t matter, or that they are simply mean-spirited, or not creatively minded.

This doesn’t apply only to artistic creations either. Most of us like the kind of feedback that reinforces our view of the world as well as ourselves, but get very defensive when this feedback goes the other way, which it invariably does. But maybe this is when we should start paying attention the most. Carl Jung said “Everything that irritates us about others can lead us to an understanding of ourselves.” Think about that for a moment. I know personally I often get irritated by loud people who try and steal the center of attention. Hmmmmm..

Not hard to figure that one out.

I would guess if we think hard enough we could all think of someone like that, and if we think even harder, we may eventually come to understand some things we’d like to change about ourselves. That’s feedback. And when we really put aside our own pride and defensiveness, there is a whole lot of instruction there as to how we can begin to improve ourselves. We don’t always KNOW how we are being perceived, and often because of this, we can get locked into our own perspective.  Perhaps Anais Nin said it best, “We don't see things as they are, we see things as we are.” Seems pretty accurate.

So personally I’m going to work on this a little this year and try not to be defensive when others have opinions about something that differ greatly from my own. Although there is often a temporary sting of rejection when we take in criticism, we can use this as a motivation to change things for the better, which is a goal that can benefit almost anyone. I know I could certainly benefit from listening a little more closely. I think we all probably could.