I don't like looking back. I'm always constantly looking forward. I'm not the one to sort of sit and cry over spilt milk. I'm too busy looking for the next cow.
Gordon Ramsey

“And Lot's wife, of course, was told not to look back. But she did look back, and I love her for that, because it was so human. So she was turned into a pillar of salt. So it goes.”

I’ve been seeing clients, patients, people, in a professional capacity since 2006 or so. It makes me a middle-tier professional when it comes to experience. I WAS a bartender for a lot of years before that, and I think I should get to count that too. You hear a lot of confessions after three Jack and Cokes.

The point I want to make is, 2016, using the clinical definition, was a shit year for a lot of people. Certainly the worst I can remember. Terror around the globe, the death of Ali and Prince and David Bowie. Syria, race riots. The disgraceful tone of the US election (I don’t care who you voted for, it was disgraceful.) Not a great year in history by any definition you want to use.

But more than that, it was something I could feel in my conversations with my clients. Some years go by where nothing much happens. 2016 didn’t seem like one of those years for a lot of people. Maybe it’s a recency bias, but I know people reading this know what I’m talking about.


2016 was the Orange popsicle. The Lemon Starburst. The chocolate in the box with the coconut in the middle.

So a lot of people, including me, are ready to turn the page. You go into that new year with hope. Thinking about how things are going to be different this year. You’re going to lose weight. Be more loving. Save money. You know the routine. And the interesting thing is, we DO get a little emotional lift from anticipating how things are going to be different. We mentally see ourselves in the new clothes, the new body, the new relationship. But as we can see by this diagram, there always comes that moment.


This is bigger than I thought it would be. 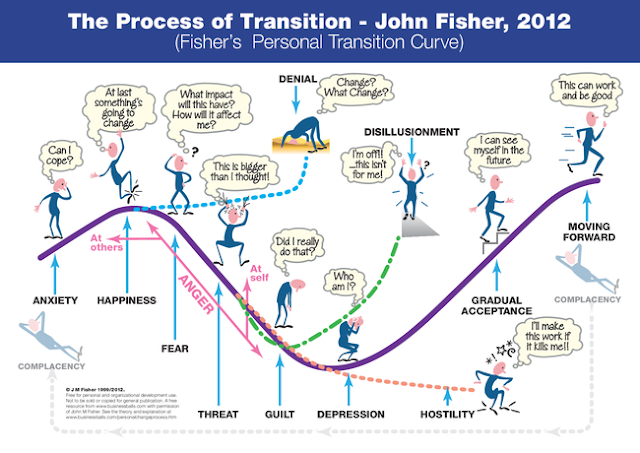 In thinking about how to sustain change, I read a wonderful premise recently called “no more zero days.” No More Zero Days

The concept is, you don’t have any days where you take zero steps towards your goals. Maybe you walk around the block, or pay five dollars towards one of your bills, or write one small journal entry. But you make the deal with yourself that there will be no zero days. This is a great read and a great motivational tool.

But one thing I’ve learned personally is that the “be more loving" goal is really about the effort I want to make with people. Having lost another young friend too soon this year, I reflected on the following quote from Jorge Luis Borges,


“I felt what we always feel when someone dies–the sad awareness, now futile, of how little it would have cost to have been more loving.”

I make myself read this several times a week. “Loving” is not necessarily my default mode and I need a lot of reminders about this.


The fact of the matter is, we all have glorious things to say about people when they’re gone.


But no so much while they’re living.


So, I’m challenging myself to be more generous with my time this year. That’s a start. I’m doing a bit of pro-bono work as a psychologist as a beginning. It occurred to me that my last 20 New Year’s resolutions or so, have been all about ME. “I’m gonna lose weight this year, “I’m gonna save money this year” “I’m gonna date a supermodel this year.”


So this year I’m challenging myself to direct more of my energy outwards instead of inwards. The standard New Year’s resolution doesn’t really work for me, and I’m not sure it works very well for anyone.


So this year I’m going to try and change my thinking instead.

So for all you out there that would also like to bury 2016 in a deep bunker underground, please hang in there and keep some hope. Every day we’re drawing breath we have a chance to do things a little better. Remember, No more zero days!