Every year, I try and involve myself in a Christmas story. And I never know what the thing is going to be. Sometimes I volunteer my time. Or give an anonymous gift to someone in need. Every year it’s a little different. I say this not to brag. It’s just. I’ve been fortunate in my life. It’s a very small thing to pay it forward a little at Christmas.


Anyway, tonight I was sitting having dinner in a lovely Mexican restaurant. There are hundreds of those in Chicago alone. There’s maybe 10 in Australia. It’s a massive treat for me to sip those Margaritas and eat those chips and salsa. You miss the strangest things when you’re away from home.


But anyway, my Christmas story.

As luck would have it, I was seated between two tables with a very young girl (let’s call them both Jenny). One of the tables was “Jenny” having dinner with her grandparents. Just the three of them. The other table was “Jenny” and the entire young, tired, henpecked biological family. Both “Jenny’s” looked adorable enough on the surface.

But that faded rather quickly.


The young family was having a hard time, as young families often do when they are out to dinner. The poor parents barely got to take a bite herding the kids, and their entire dialogue was just one pleading reproach after another. “JENNY! Eat your vegetables!” “Wipe your mouth.” NO YOU CANNOT HAVE ICE CREAM BEFORE DINNER.” Jenny!!! How many times do I have to repeat myself!!!!”


But the interesting part came from watching the second table. That “Jenny” was acting exactly the same way. But no matter what she did, the grandparents seem to have endless patience for it. They were even delighted by some of her shenanigans. “Oh Jenny, you’ve knocked down Poppas beer! He’s probably had enough anyway!” “Jenny, of COURSE we will have ice cream, but let’s try a couple of bites of our dinner first.” “It’s really such a pleasure Jenny.”

It was a fascinating thing to behold.

As far as I can tell, there are few things more delightful to people than being a grandparent. From watching my own mother in action, they practically BEG for time with the children. And let’s be honest, kids aren’t exactly easy.

As I was watching them all interact, I think I started to understand. We don’t realize the most significant moments of our lives while they are actually happening. The young family certainly wasn’t sitting there thinking about a little Christmas dinner with their children as a “precious memory.” They were tired. Stressed.

But the grandparents? It was like they were making every second count.

So what had they learned?

A lot it seemed.

One of my favorite little lines from the TV show “The Office” is from a scene I absolutely love. The character of Andy looks at his coworkers for the last time and says, “I wish there was a way to know you were in the good ole’ days before you’ve actually left them.” 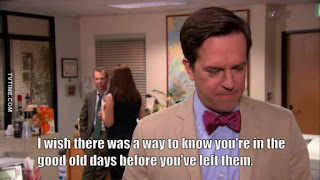 In other words, we don’t always appreciate moments while they are happening. Don’t understand the significance of a crazy family dinner at Christmas. Time with loved ones. Laughter. Road trips. The anxiety of the moment takes away the ability to reflect on those things, and often they don’t become clear until much later.

But the grandparents sure as hell understood the lesson. You could see it in their eyes. They could forgive all of Jenny’s little mistakes because they had the most precious gift of all.


The problem with that particular gift when you’re young, is that it’s sort of like getting a pair of socks for Christmas.

But let me also tell you this, after 40 or so you’ll probably appreciate a good pair of socks more than you could ever realize.

But as for the gift of time, it’s something you could see the grandparents appreciated more than anything. But with the right kind of eyes, you could also see that they were the young family once upon a time. They had so much gratitude for their time with their granddaughter. And gratitude, particularly gratitude for time with others, usually doesn’t happen until you’ve lost something. A relationship. A family member. Your youth. Your health. And when you’ve had the luxury of perspective, you promise yourself you’ll take time more seriously. Savor moments. Cherish people.

But sometimes when the cycle repeats itself enough times, the lesson finally sinks in.


And that’s what I saw in those grandparent’s eyes. An evening out with their precious little granddaughter all to themselves was the best gift they could possibly imagine.

As for the other family? They continued to have a rough time. I happened to catch the dad’s eye right as he reached for his Corona and we shared a look. He started chuckling to himself as he surveyed the carnage of overturned chips and salsa at his table. Perhaps he was having the tiniest moment of clarity.

Here are some things I often hear from clients in therapy sessions.

1.       Man, I can’t believe how fast my kids got old. I’d do anything to have one more day with them as little kids again.

2.       I only see my family once or twice a year these days. Everyone is just so busy all the time.

3.       I wish I had spent more time with my grandparents before they passed. You always think you’re going to have more time.


And perhaps the biggest one.

“I wish I had told people I loved them before they died. There were so many things I didn’t get a chance to say.”

And as a (more than) middle-aged man sitting there drinking Margaritas and eating cheese dip like it was my job (Both tables will probably outlive me) I realized I had remembered a lesson I had also forgotten. Time is the best gift. The purity of your attention is the best gift. And yes, I even got a little choked up there thinking about all of this. I probably looked like a crazy person sitting there.

But that’s not QUITE the end of the story.


On my way out the door, I paid the bill for both tables. It was my little way of saying thank you for reminding me of such an important lesson.

As, I was walking by the window, I saw several of the people involved looking all over the restaurant and out the window. Who paid our check? Why would he do that? A Stranger?