Eat, drink and be merry
for tomorrow we die

That it was everything. It was my life - like all lives, mysterious and irrevocable and sacred. So very close, so very present, so very belonging to me.

How wild it was, to let it be.

Cheryl Strayed- Wild: From Lost to Found on the Pacific Crest Trail

Sometimes I go back and reread these little essays and think, Jesus man lighten up a little. I hope this one is a little more fun. It certainly was for me to live it.

But to back up a second. Let’s talk a little bit about Dave Mathews. I met him back in 99’. He came and played at a bar I was managing on St. Patrick’s Day. He was a cool guy and it was great fun. But I was never really THAT kind of fan. The dude that has all the bootlegs and spins in a circle during the 8 minute guitar solos.

Still though, it was the 90’s and they were on the top of their game. I particularly came to love “Tripping Billies” after I heard a story about the origins of the song. According to the version I heard, Dave and some friends were on a beach and he took some hallucinogens for the first time. That night he had one of those rare transcendental moments you hope will never end after hanging out the whole night on the beach by the campfire with his friends. It sounded like such fun. Tripping Billies.

I’ve had some of those kinds of moments myself. Big roaring fire. Great friends. Some dude in a ponytail playing a guitar, (there’s always a dude in a ponytail with a guitar.) Lots of beer. Lots of fun. They were in fact some of the best memories of my life when I was a young guy in my 20’s working in five different national parks. When I thought of those great times I called them my “tripping billie” days. I never forgot them.

Sadly, it’s been a long time since I’ve had one of those moments. I always wanted to have another one though. Dozens of them if I could actually. Sure I can’t party like I used to, and a big night out has its consequences. Still though, I used to spend whole summers like that.

And yet, sometimes, if you keep yourself open to the signal, the universe spins its way back to you again.

This weekend I had one of those moments on the wild west coast of New Zealand. It’s just 45 minutes out of the big city, but it might as well be the other side of the world. Crazy big waves, and massive rocks, and weird surfers who look like the bad guys in the movie Point Break. It’s pretty awesome.

So after closing the little bar down the other day, I just wandered out to the beach and laid there for a while. It was a full moon and the stars were out and my mind was buzzing.


And then, just over the horizon, I heard something. Something like a guitar. I wondered for a second if I was time traveling. Or hallucinating.

But no. It was a guitar. And more than that it was someone playing the Grateful Dead, (is there any better campfire music?) I followed my ears until I found the sound. I instinctively looked around for the familiar ponytail. There it was! There was also a bunch of people in tie-dyes and assorted hippie garb sitting around the fire singing along. At last I had found them again.

What was a chubby guy in a polo shirt to do? I didn’t exactly look the part, but then again, I never really have. I’ve had a checkered career after dark to say the least, but miraculously never have gotten a tattoo or owned a shirt with Bob Marley or Che Guevara on it. I’ve just kind of let my depravity speak for itself..

So I wandered in, singing the words to “Sugar Magnolia” as I did. Two things bring back memories like nothing else, the things you smell, and the music that you hear. I smelled campfire, (and some other things, use your imagination), and heard the familiar sounds of the Grateful Dead.

I quickly found some people to talk to. One particularly inspired guy in dreadlocks was delivering a monologue.

“What if man, like this was the edge of the universe, and we’re just, like right now, pushing against it, making it bigger and more spiritual all the time?”

I had a few logical answers to that query, but in that moment, I forgot all about logic.


“Right on man” was the appropriate answer, and it was the one that I gave him.

So we sat and listened to music and had some great laughs until the sun came up. It wasn’t just like old times. These were new times. And they were fantastic.


Maybe I WAS pushing the outer edge of my universe a little bit.

I did get the ponytail guy to play an old song for me though. 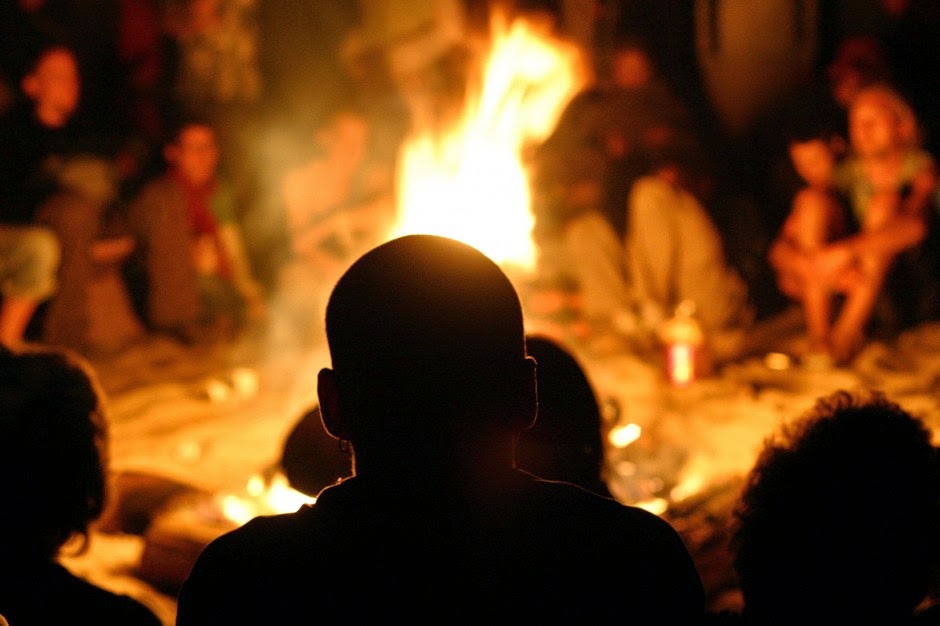